Fortune on Wednesday smiled on an Information Communication and Technology (ICT) level 08 officer in the Lagos State civil service, Mr. Oluwaseun Ogunmolu, as Governor Babajide Sanwo-Olu gave him double promotion from level 08 to 10.

Sanwo-Olu made the public pronouncement while hailing Ogunmolu, who developed an App named ‘Alausa Sabi’; an App on anything and everything you need to know about Lagos State public service.

Ogunmolu presented the App at the Ministry of Establishment, Training and Pensions organised ‘The Service: A Disruptive S.H.i.F.T’, held at the Adeyemi Bero Auditorium, Secretariat, Alausa, Ikeja.

Ogunmolu, who joined the service on level 08 in 2017, said he created the App so that every civil servant would have at his fingertip all and any information about Lagos public service.

Sanwo-Olu urged civil servants to be at their best at all times.

“You must give your best, your 100 per cent in your work because that is what determines your future. Cherish what you have, hold it fast and do your best,” he said.

The governor said that henceforth, the service was going back to the old tradition where performance would determine promotion to the rank of permanent secretary.

“So, know that you are being watched. Let your work speak for you, let it demonstrate your capacity and capability to perform as a civil servant,” he added. 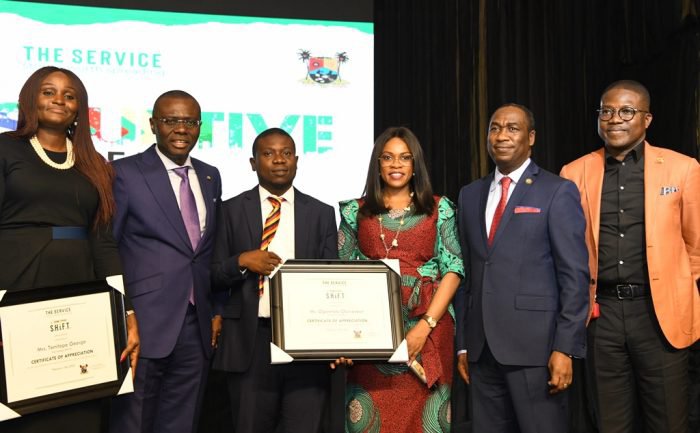 Commissioner for Establishment, Training and Pensions Mrs. Ajibola Ponle said that SHIFT was about “shifting the way we think, behave and do things.”

The disruptive SHIFT, she said, “is a knowledge sharing platform that will enable public servants see the world through someone else’s eyes.

“Most often in public service, it is a challenge to share knowledge within the system and also identify the officer with vast experience and exposure,” adding that the initiative was part of efforts aimed at co-creating a 21st century workforce in the Lagos State public service.

‘S.H.i.F.T’, according to her, stands for: Simple, High impact, Interactive, Focused and Transformational.